When creating portraits from life or memory it is easy to get overwhelmed by your own preconceptions of the face.  Witness Rembrandt: despite his mystical abilities to marry technical intrigue with the conveyance of a soulful feeling of personality, his portraits all kind of look like him.  Unless an artist is hewing close to a photograph or has a model before them for an extended period the identity of the artist invades the work. Some artists such as Nicholi Fechin have attempted to counter this through great ethnographic study and have ended up with a kind of xenophilic approach that is illuminating of the author’s view in more subtle ways.
The project here “People in General” is an effort to internalize a very broad perspective on what humanity looks like.  How can an artist best delve into the infinite variations of features and spacial configurations that are so much of human identity?
To broach this I first developed a series of 12 faces from a mathematical basis as an attempt to counter preconceptions.  Yet this method had to be improved upon. Many iterations of study develop.
When one views the human face as object, and searches for variety and nuance of form, a different kind of appreciation of humanity sets in. Experiences that are often mundane become rich.  There is nothing better than a crowded New York subway. 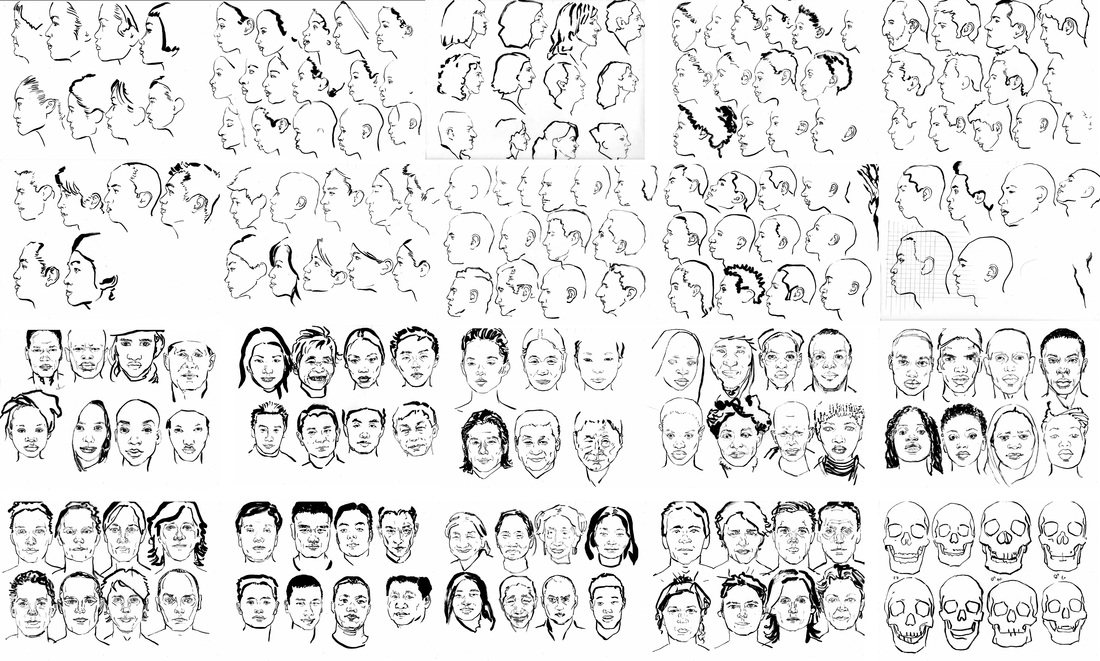 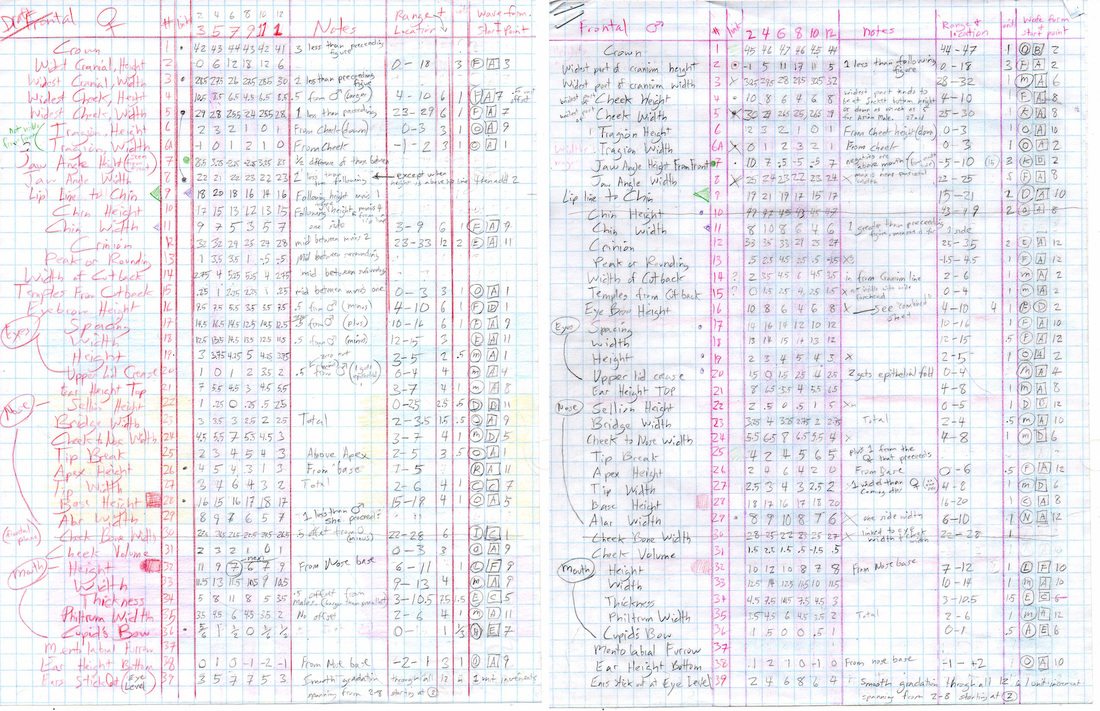 Base measurements for the faces.  Second draft, frontal measures. The numbers are established in a non scientific way.  Various biometric data sources are consulted and the information is mixed with insights gained from doing the ink drawings and intuitions about what numbers may be interesting. Data tendencies that suggest easy reads for gender and race are contradicted or the mathematical curves used to set up the gradations of features are done in such a way as to randomize particular aspects of the face in order to subvert preconceptions.
​ 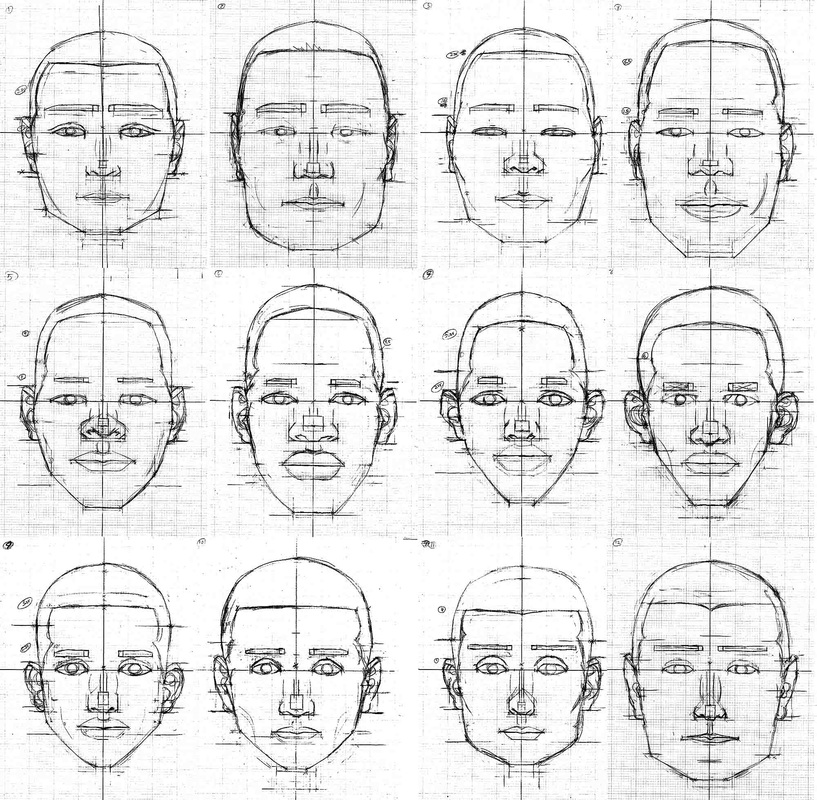 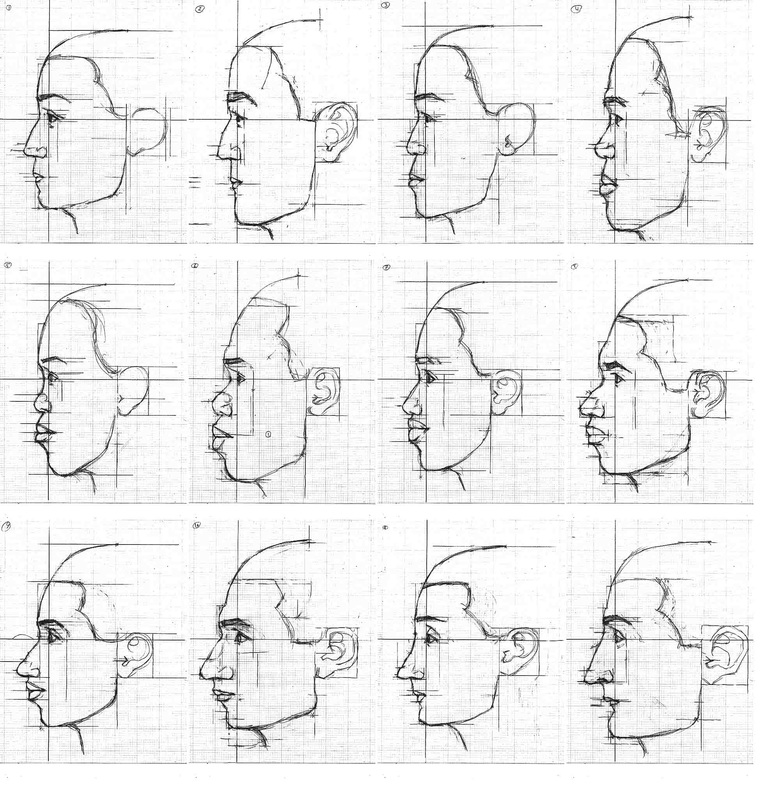 The numbers developed are plotted onto graph paper to form the profile and frontal views.  ​ 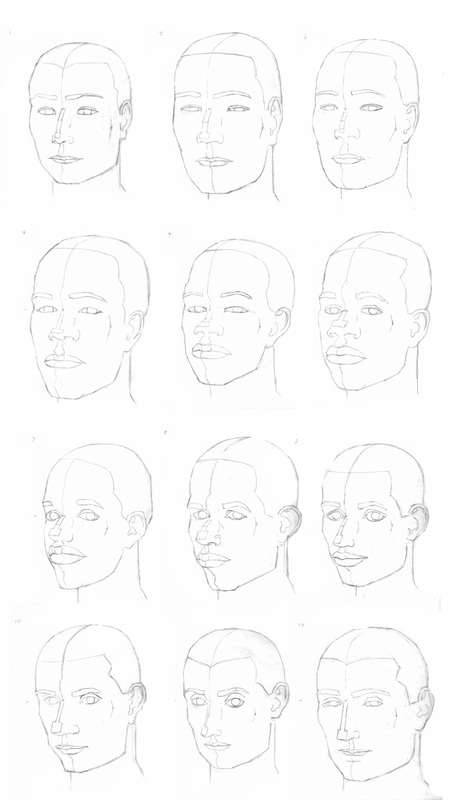 Pencil, paper and simple architectural rendering techniques used to make 3/4 view projections from the frontal and profile views.  Efforts are made to preserve the character of the base measures as much as possible.
​ 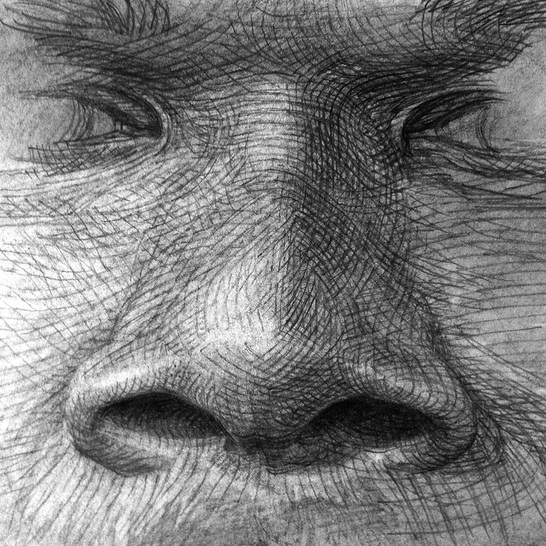 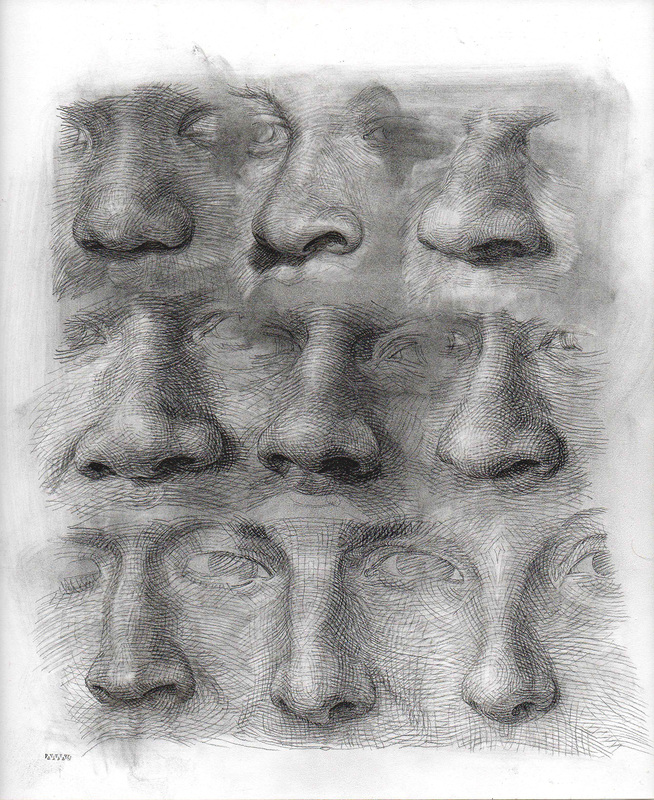 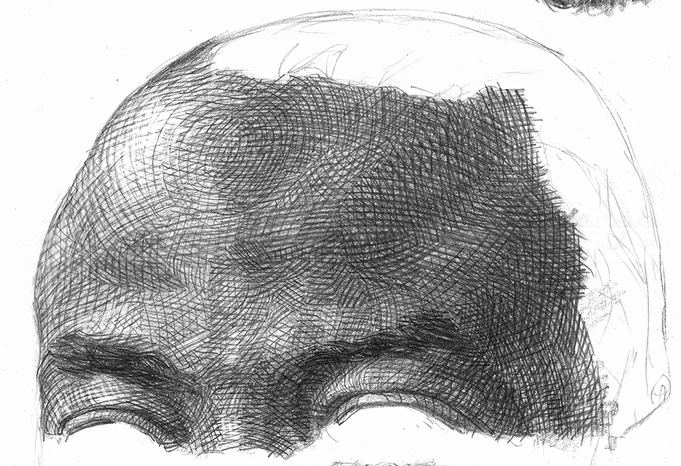 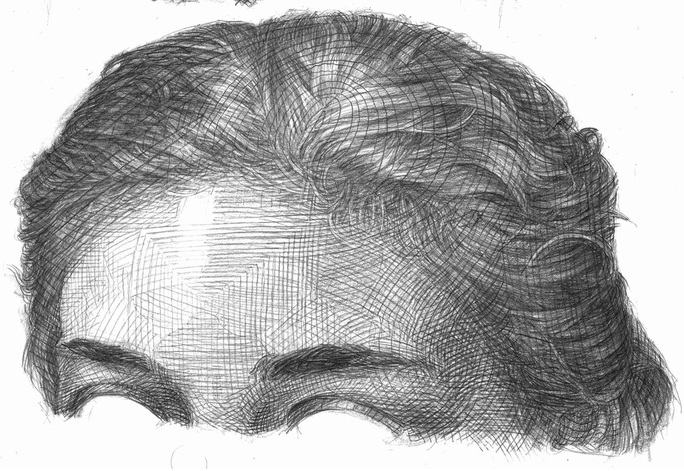 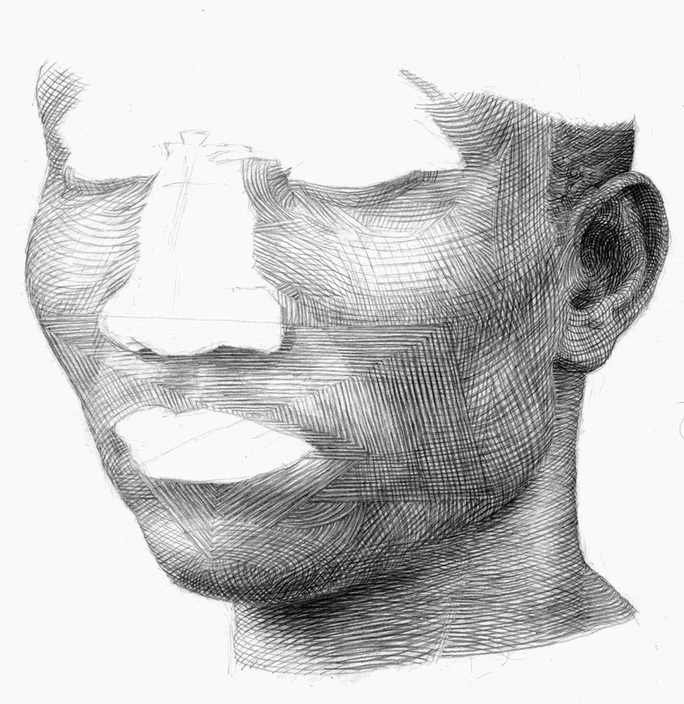 Drawing to study possible variations of the minor shapes of the face.  Trying to figure out how to bring detail to the original set of 3/4 projections.

Schematics made to develop a sense of the smaller shapes of the face, developed from image searches on line.
​ 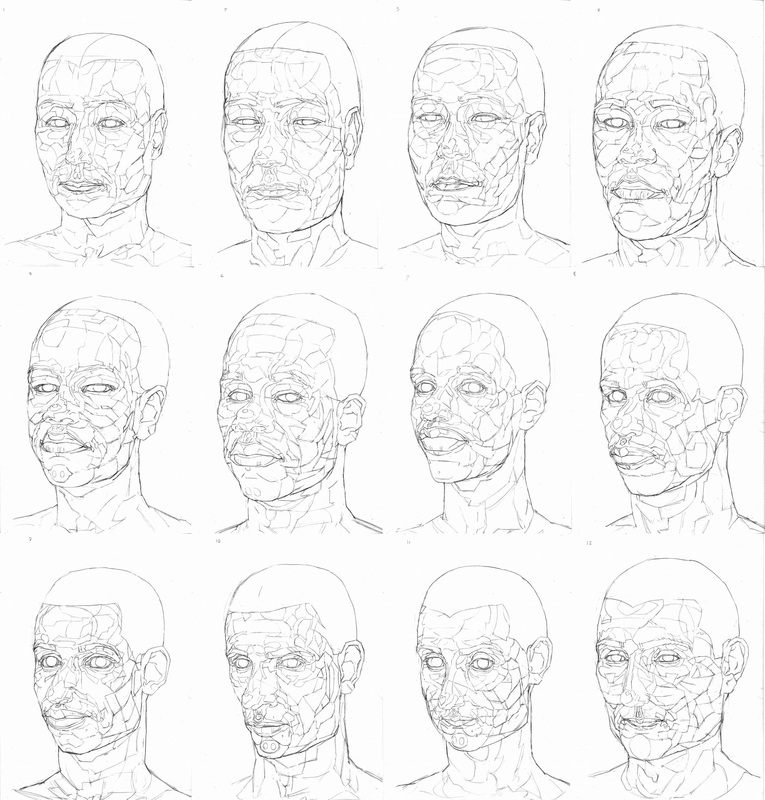 The ideas of the schematics are incorporated into the 3/4 view drawings. 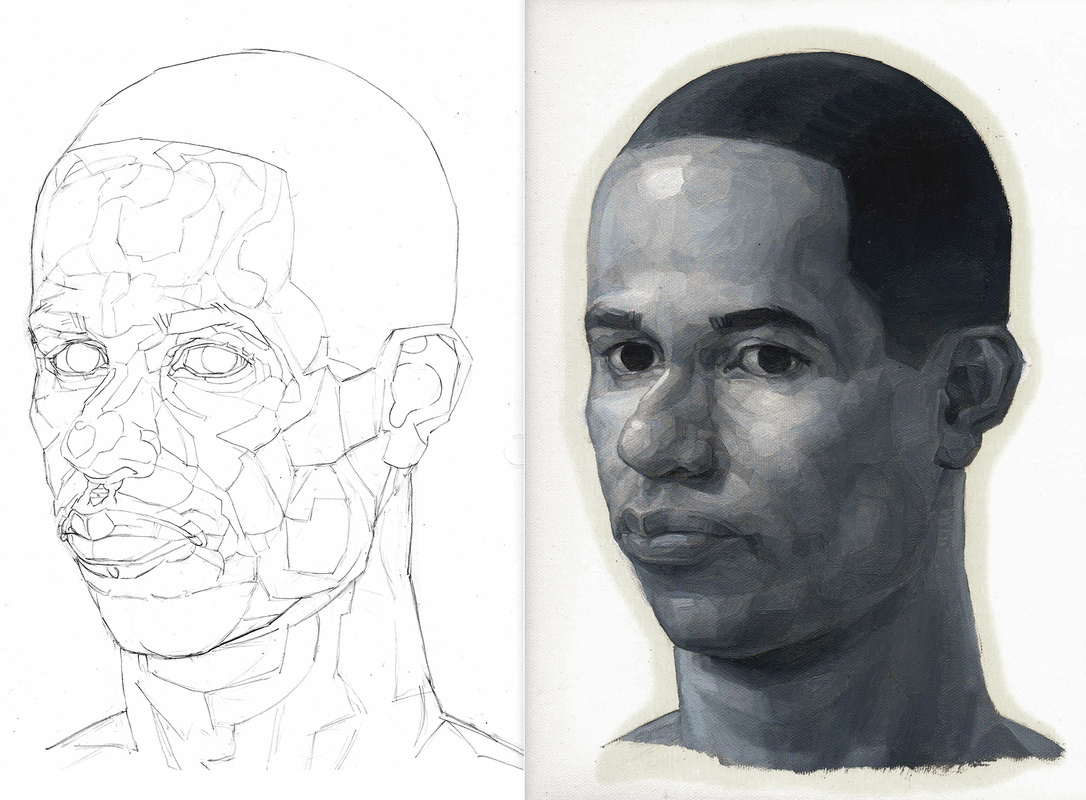 The detailed 3/4 view line drawing is used as the basis for a painted tonal study.  ​
​

​Painted tonal studies of faces 2-4, iteration 2
​
Next
Further iterations and approaches to the linking of measures, limits of measures and the relationship of that to preconceptions of the face, incorporations of developed faces into further narratives and works.
Powered by